One of the features of organic farming is not to make use of chemical synthetic products. It is not a suggestion, but a total prohibition included in the disciplinary of the biological. All chemical plant protective products as well as fertilizers of both chemical and/or mineral origin cannot be used. However, in the case of a vineyard, all most important elements for the nutrition of the plant, such as nitrogen, phosphorous and potassium are removed every year. With the harvest first, followed by the loss of foliage, with the green and winter pruning, there is a constant decrease of the plant nutritional substances.

So, if the use of chemical or mineral fertilizers is forbidden in the organic agriculture, how can we feed our plants during the winter awaiting the new vintage?

Three different methods are allowed:
1) The use of organic fertilizers deriving from the controlled decomposition of refuse of vegetal, animal or alimentary origin. They are extremely smelly and, sometime, we are not totally sure about their content;

2) The use of well ripe animal manure that, in addition to provide nitrogen, phosphorous and potassium, is also considered an improver, that is, it improves the structure and brings organic substances to the soil. It is difficult to find and spread in the vineyards;

3) The legume green manure, which implies growing some types of plants in the vineyard that eventually are cut or put underground. I will explore in depth this technique later on because, in my opinion, it is easier to realize and “greener” too. 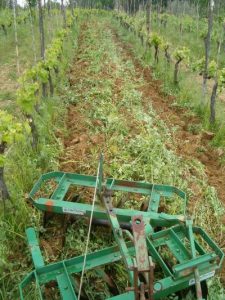 The green manure technique, in fact, operates a regeneration of the soil
because not only feeds the ground itself, but it also improves the structure
of the soil and gives organic substances.

Different varieties of plants can be used to produce this kind of manure:
favino (field bean or in latin: Vicia faba), pea, clover and vetch (we used
favino!). They are plants that enrich the soil with nitrogen and
phosphorous thanks to the root symbiosis between some bacteria and the
plant itself. In particular, the symbiosis consists in implanting the air
nitrogen in the roots thanks to the bacteria so that it will be available later
on. Not by chance these plants are called nitrogen implanters. We can also
use different plants such as buckwheat that adds potassium to the soil, or
the cruciferous (mustard and horseradish) that add sulfur to the soil.

In addition to the feeding of the plant, the green manure has the advantage
of increasing the biological fertility of the soil , increasing the underground
fauna (earthworms and insects), making the soil softer and less
asphyxiated. Here are some practical suggestions to fertilize with the
legume green manure technique. 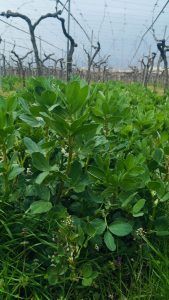 If you have any questions and/or suggestions feel free to write to me, have
a nice day!